Moving from Scarcity to Abundance

I could already see it as I came down the street, but I could not believe my eyes. Really? Already? I checked the clock–more than an hour before the doors opened–and looked again. More people had arrived, adding to its number. Did they not know that we would be doing this for two full weeks (and probably more)? We told them they did not need to be here today–that they could come later in the week–but here they were–and it had only just begun.

“It” was a line of people that snaked around our building on the first day of Thanksgiving registration several years ago. And “it” was completely unnecessary. We prepare for about 600 families to register for our Thanksgiving program. It is our sole focus for two full weeks to register families. Each family registered gets a voucher to come back the day before Thanksgiving to get a turkey and other items to round out the meal–even jellied cranberry sauce. It is a great basket of food–and the voucher is a guarantee to get it all.

Which makes it more amazing that the line I saw on that first day of registration was nothing compared to the line on the day of distribution. It went all the way around our building and into the parking lot next to us. There were so many people that cars had to park a block away to find a spot. It was not just an amazing sight–it was dangerous at times. 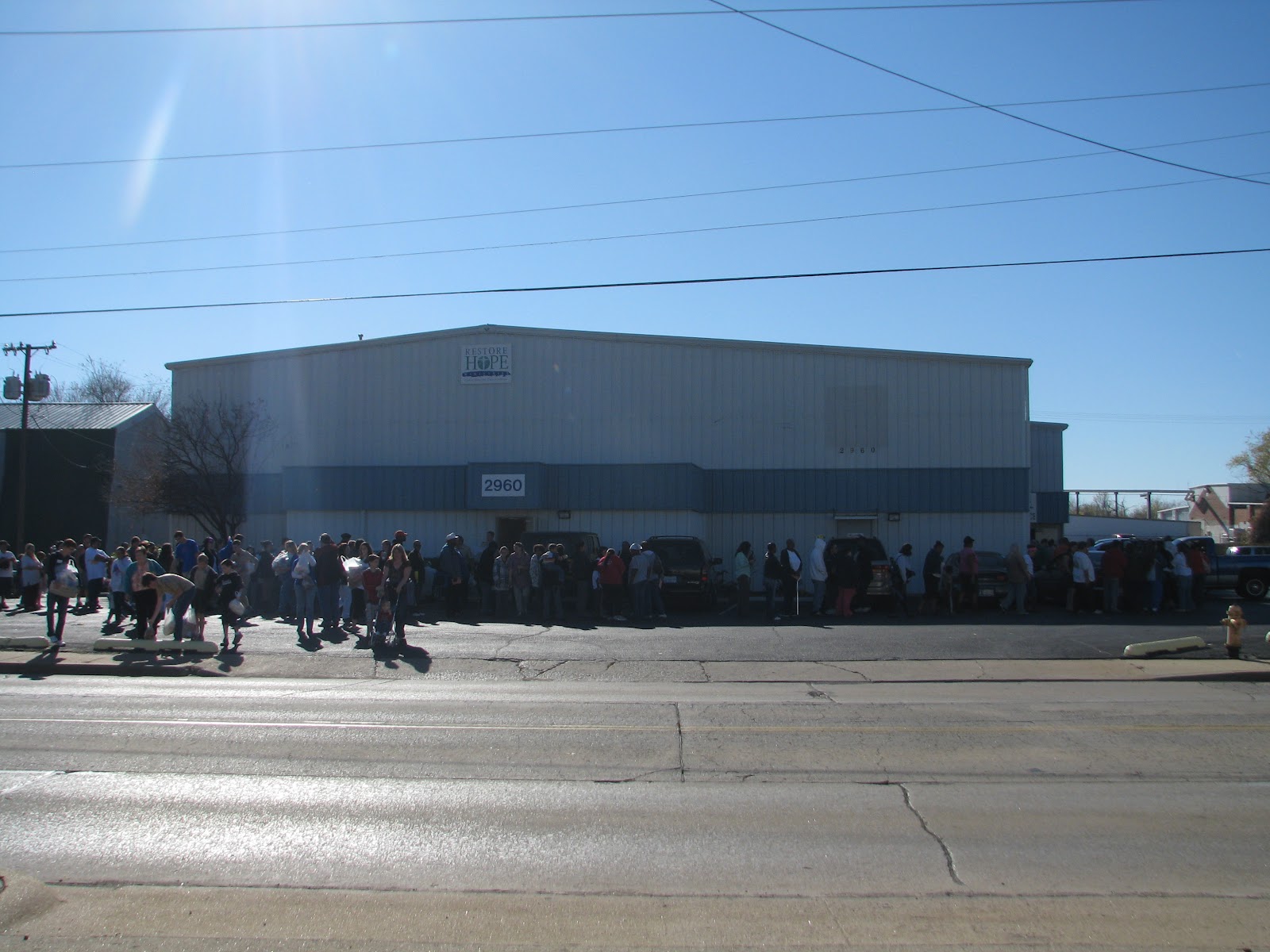 But, again, it was completely unnecessary. When I saw both lines, I wondered what would drive a family to wait–in frigid temperatures–for a Thanksgiving basket. I knew they were wanting to feed their family–we see that every day at Restore Hope–but, as I looked at the line, I realized that what seemed so out of place to me was perfectly normal for those waiting.

Waiting happens a lot for the families we serve. They wait at bus stops because the inadequate bus is better than unreliable cars (or unreliable friends who offer a ride). They wait at government agencies for their number to be called to help connect to services. And, at so many other social service agencies, they arrive early and wait in hopes that the agency will not run out of funds for the day before they are seen–or fill their available appointment spots.

That is the way we used to work too–in one of our programs, at least. When I first started working at Restore Hope, our rent program felt like a radio contest: “Be one of the first 15 callers and YOU TOO can win a month’s rent! Call now!” Four of us would answer the phones each morning at a frenetic pace–filling the available spots in about 15 minutes. It did not seem right. It was a model–like those other models noted above–that was based on scarcity, and not abundance (so we don’t do it that way anymore).

Scarcity is the idea that there is not enough, that the available resources will run out, and so you need to do whatever it takes (arrive early, wait in line, camp out) to get those resources. And it is not just the poor who wrestle with scarcity on a regular basis. Shoppers will devise intricate plans in the coming days and weeks to make sure they can get that special whats-it in the stores. They will arrive at ridiculous hours so they can get that big sale and wait an inordinate amount of time to get that parking space close to the door.

I have done it too. I have camped out for tickets. I have been one of those Black Friday shoppers. I have waited in my share of lines.

But it just did not seem right to do that with Thanksgiving baskets. The holiday celebrates abundance for goodness sake. From that first awkward sharing between the refugees from England and their gracious hosts, Thanksgiving has been about sharing abundance. Christians have appropriated the holiday to add giving thanks to God for the many blessings we see. The holiday is about abundance at every turn–and yet there “it” was…a line of people who feared scarcity.

Our God owns the cattle on a thousand hills, says Psalm 50. The Scriptures tell many stories of scarcity turning into abundance. Joseph used abundance to feed Egypt and its neighbors through a famine (Genesis 41). The prophet Elijah asked a widow (1 Kings 17) to give him her last morsel of food (she made it as her last meal with her son). Amazingly, she shared the food–and her jar of meal and jug of oil never ran dry. The prophet Elisha took a small amount of oil and it turned into a houseful–and the profits from its sale saved a family from certain death (2 Kings 4). Jesus took a young boy’s lunch and fed thousands–with 12 baskets left over. The stories go on and on…

So, if we believe the Bible, why do we propagate scarcity? Why would Christians allow people to believe a lie that there is not enough. Why do we not take Jesus at his word in John 10:10 that he came “that they may have life, and have it abundantly”? He told parable after parable of how he was doing this–stories that turned the world upside down and opened up doors of possibility for those long shut out and tossed aside. We read all this and then go about our days as normal–the world stays right-side-up and the door shuts on those who came too late–first come, first served…right?

Not anymore. Not at Restore Hope at least. After we realized what was really behind those long lines, we decided to shake things up–and tell a story of abundance at the same time. When folks registered, we gave them a voucher for one of three groups. The first group to sign up received vouchers for the last distribution group. The last group to register received vouchers for the first distribution–last shall be first, right? Unfortunately, the recipients did not know what we had done. So we told them. Sure enough, the group that waited in line on that first day of registration came early on the day of distribution. It was the longest line we saw all day. So, before I opened the doors I fessed up:

“I have to tell you something. I played a dirty trick. You were the first 200 people to sign up for a basket. You were here early on that first day. But all the others have picked up their baskets already. This is the last group to get baskets.” After I paused to catch a few VERY angry looks, I continued: “But we did this so you would know that we were not going to run out. We believe that our God owns the cattle on a thousand hills. There is enough for everyone and there is enough for you. So we made the first last and the last first–we read that somewhere.”

As that last line sunk in, the angry looks turned to smiles. They remembered what Jesus said. And they realized that it was not a “dirty trick” after all. It was the truth.

This year, as we planned our Thanksgiving program, there was doom and gloom about the avian flu that wiped out entire flocks of turkeys. We thought prices could make buying turkeys out of reach. Making matters worse, the oil industry faced an uncertain future and our recent donation efforts had seemed to suffer from that uncertainty. Scarcity was at our doorstep again.

Instead of giving in to the lie, though, we remembered that our God owns the cattle–and turkeys–on a thousand hills. A generous wholesaler gave us a better price on turkeys than we had seen in years. Gracious donors outpaced expectations to meet our needs. We had enough.

There is enough. And we get to share it. Thanks be to God.

*Rev. Jeff Jaynes is a United Methodist pastor and serves as the Executive Director of Restore Hope Ministries, an anti-poverty outreach agency that serves families in need in Tulsa. To find out more about Restore Hope, go to www.restorehope.org. You can like them on Facebook, or follow them on Twitter or Instagram (@rhmtulsa).